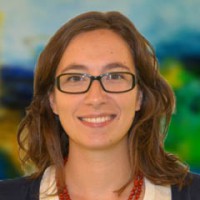 “Would you prefer to to fly in an aircraft which was glued together, or in one that was bolted together?” Sofia Teixeira de Freitas, Assistant Professor at TU Delft, asks. She is convinced that adhesive bonding will make travel by air both cheaper and greener, and just as safe as planes made with nuts and bolts.

Teixeira studied at the Instituto Superior Técnico in Lisbon, Portugal, where she received a master’s degree in Civil Engineering. She then attended TU Delft where she earned her PhD in the same field. It was during this period that she became interested in joining solutions, which she would continue to work on while focussing on the aircraft industry. Teixeira has since been awarded a young talent innovation award by the Netherlands Organisation for Scientific Research, as well as a Delft Technology Fellowship.

“Adhesive bonding has been used for several years instead of, or together with, rivets in conventional metal aircraft,” she explains. The same methods used for planes made from metal have been used for composite aircraft. Teixeira is convinced that improvements can be made to the construction process, with new ways for designing the joints to be used in conjunction with glue, without hampering performance. Which in turn will lead to benefits for everyone. “Glue can be the key for making air traffic cheaper and greener.”

It is an idea that Teixeira is eager to share at the upcoming salon. Though people might not have as much trust in glue as they do in riveting, Teixeira is convinced that the benefits of this construction method will help change people’s minds.

If you are interested in hearing more about why glue is better than rivets, come join us and listen to Teixeira’s talk during the next TEDxDelft salon at Theater de Veste on Sunday October 25 at 15:00.