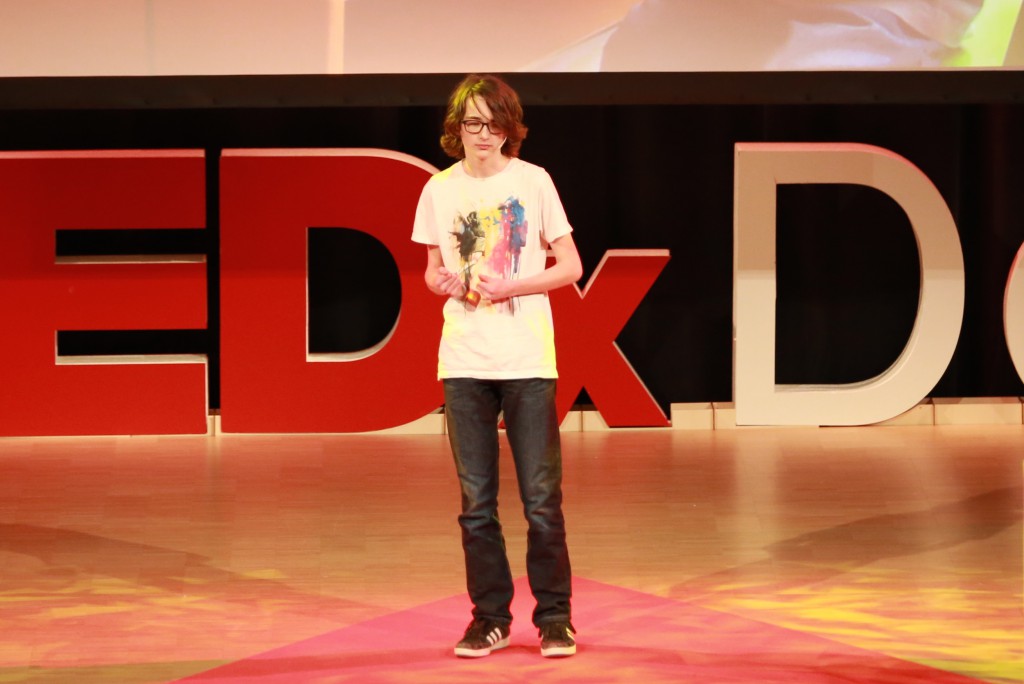 “Hello world! This year I celebrate my tenth anniversary as a programmer.” That is how Puck Meerburg greets the audience. Meerburg is clearly a digital native. He was developing iPhone apps at the age of ten, and already has fifteen apps to his name. Now, at fifteen, he has joined a team that is actually developing a whole new Operating System for Mac and PC. You can’t help but wonder what he will be doing in five or ten years time.

“When I was five, my parents bought me a computer, so I wouldn’t interfere with theirs that contained the work stuff.” This meant he could do whatever what he wanted with it. And at the of six, he was able to write code in javascript and programme small websites. He spent all his time learning code. The computer was his playground. “I even coded on paper, when I was away from my computer,” he confesses. And when the playground Twister dial had broken in school, he simple created a digital one.

Meerburg compares learning to programme with learning languages. “First you learn the letters, then the words, and then you can make sentences,” he explains. He wonders why coding is not a regular subject in school. “Once you know the basics of programming, you can develop your beta skills.” Computational thinking, for example.

To show the audience how easy it is, he programs a maze-solving robot on stage. “You just divide problems into bite-sized ones and solve those.” Despite the ease with which he does it, he undoubtedly keeps most of the audience baffled, or in awe at the least.

“Kids in school get only thirty-five hours of computer science each year, learning to surf the internet and use powerpoint,” he argues. “But they spend a thousand hours learning languages.“ Meerburg feels all children should learn programming in school, even if they are not planning on becoming programmers. Why? “It will give them more understanding of the digitized world we live in, and they will also become better thinkers.”