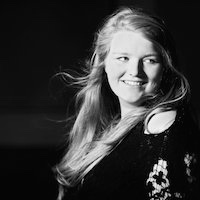 Oisin Zandee wants to reach out to those who need to hear her message. It’s a message of hope, about being capable of surviving with dignity and respect. As a young woman, Zandee has found empowerment through her music, which helped her process negative experiences.

In 2014, Zandee made huge an impact on television when she sang about her uncle’s attempted suicide. At the tender age of 17, Zandee performed live to a national audience on the Dutch television show De best singer/songwriter van Nederland. Described as a unique blend of folk, soul and indie, Zandee songs are a reflection of her life experiences.

Since a lot of girls of her age are struggling with negative self-esteem, Zandee wants them to know that they are good enough and that they should always stand up for themselves. The singer believes that showing vulnerability is not a weakness, but a strength. “I think accepting who you are is the key to self-empowerment and no one should try to be someone they’re not. Life is too short for that!” she says.

At the upcoming TEDxDelftWomen event, Zandee will share her message of hope and survival to a worldwide audience. As a result the singer feels honored to be invited to perform, especially since it’s a women’s event, and she’s all about empowering women.