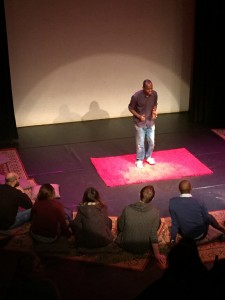 The darkest night can be interpreted in many ways, says Ogutu Muraya, the evening’s storyteller. For writer Edgar Allen Poe it was his canvas, allowing him to paint stories. It has been a source of inspiration ever since mankind learned how to create fire, and gather around it on cold winter evenings to tell stories: tales of the dangers that lurk outside, starting out small but then turning into legends.

Yet it is also a binary way of looking at things, black and white, light and dark. So what if it could be more complex. What if it could be a box of mysteries? The darkest night can mean anything to anyone, and with today’s technology people have a plethora of ways to express them. Its definition has changed throughout the centuries, from the dangers outdoors to something more demonic, or about mourning. But then in some cultures, remembering the dead is a celebration.

The darkest night has always fascinated and inspired storytellers. The stories may have evolved throughout the ages, but in general, they are associated with fear, the absence of light. But rather than be scared of it, embrace it, and tell it. Make the darkest night shine bright.

And with this even,t the year 2015 comes to a close for TEDxDelft. Fortunately, the events will keep on coming in 2016, with the first one taking place on 21 January 2016. We hope to see you all then for the next Cinema event.