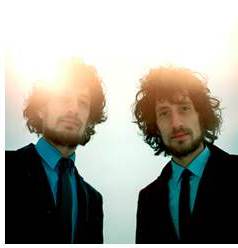 They say you should always save the good stuff for last…We have surely done that. We are presenting to you nothing less than…..Tangarine! The brothers Sander & Arnout Brinks will be performing at TEDxDelft, October 4th.

The theme of TEDxDelft matches Sander & Arnout perfectly. ‘Do try this at home’, or in their case ‘Do try it all yourself’ was the credo of the guys for years. Playing everywhere where you could imagine one to play. From living rooms, to theatres, to festivals to community centres. They did it all themselves: creating a stage, selling tickets, being their own roadies, light- and soundmen. They even cleaned up after their gigs….

Of course, finally, their hard work and incredible talent did not go unnoticed. The Dutch television show ‘De Wereld Draait Door’ contacted them to perform in the famous ‘one-minute performance’ that bands get on the DWDD show. One magic minute turned their lives upside down. Amazement by many that Tangarine had not been discovered sooner, viewers were in awe of  the different, pure and remarkable sound of the twins.

Then the offers came in, one after the other…Sander and Arnout consciously chose Excelsior as they knew they would get to make great records there.

Excelsior arranged a match made in heaven by combining Tangarine to Tim Knol en Matthijs van Duijvenbode. Wine, a campfire, great talks, melancholic moments, and sharing their personal journeys got them on the right track. That night the first steps towards their first Excelsior album were taken.

‘A debut album  without being a debut album’: Seek & Sigh. It can be seen as a biography written in music. About the path they took, the search within themselves, discovering their ideals, dreams, thoughts and hopes. The songs are beautifully harmonized, their lyrics get to you from the start. From Hollywood-like tunes to psychedelic peaks.

Seek & Sigh is a multi-layered, overwhelming and intensely beautiful album. It really shows where they came from, but even more where they stand now. From Hollywood like tunes to psychedelic  peaks.

And, there is even more. This week was announced that Tangarine has become the house band of DWDD, performing every last Friday of the month. One great future lies ahead for Sander & Arnout.

Seek & Sigh….Also for us. Our search is over and we know for sure that our TEDxDelft audience will sigh out of amazement. Looking forward to that…secretly  wishing it were already October 4th…..