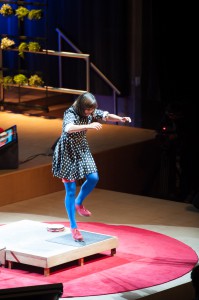 When Marije starts tapping, the crowd is dead silent. The only thing you can hear is the sound of her tapping feet on the streets of Istanbul; the scenery for her new movie “One million steps”.

A Turkish man starts singing along with the rhythm of her dance and Marije starts explaining that when she tap dances, everything evolves around the moments in between the taps. That the moments of silence, in between the beat, are the moments that count the most. Because it’s within those moments when you contemplate on your next step and figure out what your next move would be.

The average person takes a little over a million steps per year. When we do this our body often switches to autopilot. We take those steps without even thinking about them.

Did you ever think about the millions of steps people take in their lives? How they take them and where they lead? Some are serene, some hectic, taken with attention on each step or with the mind always on the destination. Do we sometimes loose sight of the many possibilities on the way? Intrigued by these questions Marije Nie decided to take a closer look at feet in action, in order to make something visible that is often a disregarded but essential part of people’s lives.

During the little snippets of the movie, we see Marije in the streets of Istanbul. Interacting with the crowd during every step, engaging with them every step of the way. Moving them with the very beat of her shoes on the pavement, making them change and stop their pace.

Barely two months after their second shoot in Istanbul, thousands of people stopped walking their normal steps and were swept onto the streets, looking for a new way… And there turned out to be a strong link between the story of a lost tap dancer finding her way – and the reality in Istanbul during that time.

Marije’s message to all of us: “A reality gives a moment of reflection and inspiration to people all over the world. How to do this from home? Pay more attention to the silences in between. It provides a doorway for you to pay attention to what you chose do within those moments and plan your next steps.”