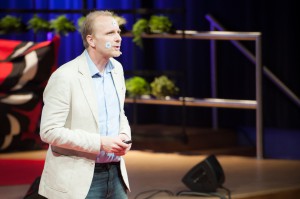 Professor Maarten Frens is not just brainy, he is a brain professor, and a specialist on the subject of brain enhancement. At TEDxDelft 2013 he tells us all about Transcranial Direct Current Stimulation or TDCS. Transcranial what? Basically, it is low voltage electricity applied to the skull. It is supposed to increase the speed at which you can learn things; it can make you read faster, for example.  Limitless learning power, we’ve all wished for that at some stage in our lives, so bring it on! And now for the ‘do-try-this-at-home’ angle: you can make your own TDCS device by just going to the hardware store and buying two sponges, salt, wire and a battery. Or buy a device on the net, because they are already available online and hot among gamers.

But does it really work? It sounds like a Tell Sell solution. As a sceptic and a neuroscientist, Maarten studied the scientific literature first. But scientific publications don’t always mean something works, due to the publication bias. Positive findings are much more likely to be published than negative results. Still, the research gave Maarten an idea on how TDCS  would work, if indeed it does. What happens is, the electricity does not work directly on the brain, but it stimulates the formation of a molecule in the brain called Brain Derived Neurotrophic Factor or BDNF, which makes neurons grow.

Maarten decided the subject warranted more research, and setup experiments centred on learning new motor skills. Why motor skills? Because movements can be monitored very precisely, meaning clean experiments and clear outcomes. And he goes on to show us  this onstage when two volunteers come on, Fabian and Lisette. Lisette has to throw balls at Fabian while wearing prism goggles that make her see Fabian at an angle. A difficult task, but after a number of throws her brain already adjusts and her aim improves. Until she takes the glasses of, and she has to unlearn her newly acquired motor skill again.

Maarten decided to use mice for his experiments. One reason is that there is less of a placebo effect with mice: they don’t know what they are expected to do beforehand. Maarten and his team found that mice definitely learn faster with TDCS. Also, the electrical activity in the brain of the mice was higher for up to an hour after the stimulation. Moreover, so-called BDNF mutants, mice that do not benefit from BDNF, also do not benefit from electrical stimulation, so there was a clear link between stimulation and performance.

Nice for the mice, but how is TDCS going to affect us? One way could be in the field of rehabilitation for people who have suffered a stroke. They have a lot of re-learning to do, and TDCS could speed up that process, and the outcome of the rehabilitation may be better than without electrical stimulation. Maarten also predicts that by the 2016 Olympics, we will read the first headlines about electrical doping. For athletes, every little bit counts, and a few per cent of extra learning speed can make all the difference. They can outperform themselves and set new records. But is this really doping? Or is it simply enhancing a natural process, comparable to eating very health food? The jury is still out on that.

And what about you and me in the audience? Is this going to help  us, for example in studying for an exam? Not in the near future, Maarten thinks. We are not going to notice that few per cent extra.  We are already pretty  limitless as we are. Now that is good news!