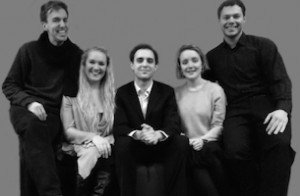 If anything can break the space time barrier (besides The Flash) it’s music. Gear up to travel through time at TEDxDelftWomen 2015 with musical ensemble Fin’Amors.

Travel to medieval Europe and the courts of the Renaissance with the Netherlands-based group performing with harp, fiddle and percussion instruments.

Fin’Amor or ‘courtly love’ was a medieval tradition that celebrated nobility, chivalry and inspired some of the best poetry and songs of that era. The ensemble comprises musicians from around the world and they recreate music from the Middle Ages to the Renaissance. “Music from this period is actually well archived.  The interesting thing is how a song is interpreted. Unlike today, in the medieval time song notations were just one line and the musicians chose their own harmony and rhythm,” said Ruth Fraser.

Their playlist for the event includes a traditional Scottish folk song called The Rowan Tree, Irish and Cornish songs and, among few others, a French-song called Chanson de Malmariee. They came across Chanson de Malmariee in an anthology of songs by and about women in the Medieval ages. The song is a tongue-and-cheek comeback at a wife-beater. “It’s in medieval French, from around the 1200, a time when women didn’t really have a lot of power. The woman singing says her husband beat her because she took a lover. In turn she says she will take revenge by cuckolding him and continuing to sleep with her lover.”

Having been around for a year and half, the group has been hard at work with their music and performances. “We are very excited about getting a chance to perform on the TEDx platform. Especially because it’s a ‘Women’ event and it’s local.” Three members of the ensemble will be performing at the event, Fraser (voice and harp), Julien Mousseigt (voice and percussion) and May Robertson (voice and fiddle).