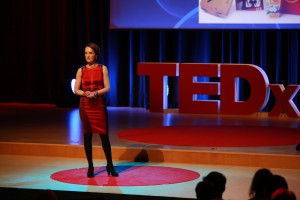 “I do love my freedom more than anything in the world. We all do!“ said Esther van Fenema. But is unlimited freedom actually a good thing?

Van Fenema was a musician to begin with. She studied violin at the Conservatory of Amsterdam before she moved to Belgium to pursue her interest in medicine. She then began to practice her profession in the Netherlands. She eventually decided to specialize and became a psychiatrist at the Leiden University Medical Center, also continuing to explore her music interests. “There is always a misunderstanding of psychiatric disorders,” she said. “The World Health Organisation predicts that depression will be the biggest disease in 2020. It is high time we change our lifestyles to make the right choices.”

Van Fenema had always marveled at the lack of knowledge in accepting that the brain is a working mechanism. She reasoned that we therefore often misunderstand our freedom. “Freedom is very precious. But without boundaries, freedom becomes a risk factor,” she pointed out. Van Fenema is critical of the choices people are tempted to make,  where there are no boundaries. “Not all are born to be free,” she said. “Some of us are more vulnerable than others.” She said that we need to make sure that this will not lead to unfulfilled lives or depression.

Calculated decision making in important life choices, reaps the best benefits of our freedom. “I have always enjoyed the freedom to follow my passions,” she said. “We have to formulate our boundaries, rather than overlooking the limits, with the slogan of unlimited freedom. Because we are responsible for each other.”

“It is normal to see parents set boundaries for their children,” Esther van Fenema, psychiatrist, says. “As an adult however those restrictions are no longer there, there is complete freedom.” But, Van Fenema asks, is having all this freedom a good thing?

Van Fenema initially set out studying violin at a conservatory in Amsterdam. After four years she went on to study medicine in Louvain, Belgium, where she simultaneously continued studying violin in Brussels. From there she returned to Utrecht to continue her studies to be a doctor. Having attained her degree she worked for a year as a doctor in first aid, before starting her education to become a psychiatrist at Leiden University Medical Center. “It is the best profession there is,” she says. “I hesitated about surgery, but in the end I found the brain to be the most interesting part of the human anatomy.”

For Van Fenema diagnosing a patient presents her with a new challenge each and every time, as no two cases are ever exactly alike. And finding the root cause might not always be as easy as it seems. “Sometimes a patient might be afraid to say what is troubling them. And sometimes they simply cannot, because they are not fully aware of what the cause actually is.” So Van Fenema must be creative, using interview techniques to assess her patients. It is something she relishes, but as time has gone on she has started to realise that many of the cases she and her colleagues have treated could have been prevented. Cases where people were vulnerable and might not have been aware of this, subsequently unable to resist the temptation of drink, drugs, or food. “But then, does the patient have no one but him or herself to blame?” she asks. “Or should the blame lie with society in general for allowing people the freedom in which they can fall prey to detrimental behavior?”

Herein lies the crux of the matter for Van Fenema, the debate which she feels must be held. Though plenty of people can deal with this sense of freedom just fine, there are those for whom it can be overwhelming and detrimental to their health. Is freedom a good thing if it allows people to harm themselves or others? Discussing freedom can be a tricky topic, Van Fenema realizes. “If you question our freedom, you are easily demonized.” Yet it is a question she strongly feels must be asked, and is thrilled to discuss on the TEDxDelft stage.

Are you curious to hear how Van Fenema views this debate, or wish to join in the debate yourself? Then buy your tickets now, join us on Friday 15 April and come celebrate the universal genius.