TEDxDelft is happy to announce that tickets for the main event on Friday 15 April 2016 are now for sale. Click here to order your tickets online to make sure you will be there to listen to exciting new ideas and perspectives.

This edition will be TEDxDelft’s 5th anniversary and will be held on the birthday of one of history’s biggest thinkers, Leonardo da Vinci. Come join us on April 15th to celebrate the universal genius and share some more brilliant ideas.

Keep an eye on the TEDxDelft website as the speakers for this year’s event will start to be unveiled soon. 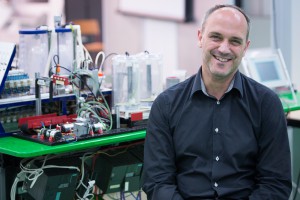 “It is very inspiring to me to be part of the TEDx organization,” says Rob Speekenbrink, licensee, curator and TEDxEurope ambassador. Since co-founding the TEDxDelft platform in 2010, organizing the event has given him plenty of inspiration. As such Speekenbrink, who works as an online media consultant for TU Delft, is perfectly poised to provide engaging speakers and topics at every event.

Indeed when Speekenbrink set out to organize the first TEDxDelft, it was the need for inspiration that drove him. “When I first started out I was fed up with normal events that cost a lot of money and take a lot of energy and time, and usually there was not much inspiration, and that still is the case.” Organizing TEDxDelft has provided him with what he had been searching for. In addition, the large network of people he has met as part of the organization have enriched the experience even further.

As TEDxEurope ambassador, Speekenbrink now assists at events across the country and beyond the border as well as overseeing Delft. “Since April this year I have been the TEDxEurope ambassador, so my role has shifted to being a consultant for other TEDx events in the Netherlands and Belgium to help them get started.” With an ever-increasing involvement in the organization, one can always count on Speekenbrink to deliver another inspiring TEDxDelft event.

What is your current role at TEDxDelft and what does that entail?

I am still the licensee for the coming event. We have been looking for another person to take over the license, and we have found someone, but it is a little bit difficult to transfer because of the structure TED has for licenses. A new licensee would have to attend a TED event, and the next one is in December.

If you could choose a historical or fictional figure to give a talk at TEDxDelft, who would it be and why?

I proposed hosting an event with deceased historical figures like Einstein, for instance, and to re-enact Einstein on stage talking about the theory of relativity, but it wasn’t allowed because the idea is that you are able to work with the speaker.

I still do geocaching, it is my nerdy little secret. I like to be with my family at the weekends and spend as much time with them as I can, because they give me a lot of energy. My hobbies and work are very much the same thing I think. Being involved in TEDx is still a hobby of mine, and I am very grateful that I get to do that next to the work I do for the university.

If you had the opportunity to give a TED talk, would you?

No. There are several kinds of people. I am one of those people who would probably never do a TED talk not because I wouldn’t like to, but because I don’t think I could do one.