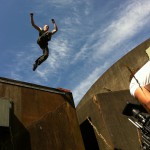 Progression stunts is the largest group of specialists in the field of parkour, freerun, acrobatics, tricking, stunts and handbalancing in the Netherlands. They appear in advertisements, demo’s, stunt-doubling, television shows, movies and lots of other places. Progression stunts entered the “Holland’s got talent” show in 2011

Parkour (sometimes abbreviated PK) is a method of movement focused on moving around obstacles with speed and efficiency. Originally developed in France, the main purpose of the discipline is to teach participants how to move through their environment by vaulting, rolling, running, climbing and jumping. Traceurs (parkour practitioners) train to be able to identify and utilize alternate or the more efficient paths. Parkour can be practiced anywhere, but areas dense with obstacles offer many different training opportunities.

Overview
Two primary characteristics of parkour are efficiency and speed. Traceurs take the most direct path through an obstacle as rapidly as that route can be traversed safely. Developing one’s level of spatial awareness is often used to aid development in these areas. Also, efficiency involves avoiding injuries, both short and long term. This idea embodying parkour’s unofficial motto is être et durer (“to be and to last”).

Terminology
The first terms used to describe this form of training were “l’art du déplacement” and “le parcours”. The term “parkour” was coined by Hubert Koundé. It derives from “parcours du combattant”, the classic obstacle course method of military training proposed by Georges Hébert.

A practitioner of parkour is called a “traceur”, with the feminine form being “traceuse”. They are substantives derived from the French verb “tracer”, which normally means “trace”, or “trail” (as in “he escaped without a trace”).

Showreel
This showreel is made by one one of the progression stunts members, Bart van der Linden.

Progression at Holland’s got talent

TEDxDelft 2011 Speaker | Felienne Hermans TEDxDelft 2011 Performers | TTYPP: Max Kisman, Peter Mertens, Donald Beekma...
Scroll to top
We use cookies to ensure that we give you the best experience on our website. If you continue to use this site we will assume that you are happy with it. OkRead more