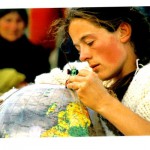 Manon Ossevoort is a professional actor and theatre-maker from the Netherlands. During her studies at the ‘Amsterdam School of the Arts’ (AHK Theatre) Manon learned that for every story you want to tell, you have to find the right form. Sometimes a story is best told in words. Other times an image you create or a choreography have more impact. When she created the concept for the ‘Tractor Girl’ story Manon realised that this particular story would only be truly fascinating, exciting, ludicrous, and hopefully worthwhile, if she played it out in reality. People could follow the adventures of the ‘girl on the tractor’. On her way Manon captured her quest and travels on film, photo’s and in writing. After the real-life journey, the story could be brought to an audience in a book, a children’s picture-book, a theatre-performance and a documentary movie. This way the ‘Tractor Girl’ project challenged Manon Ossevoort to expand her talents, also becoming a writer, photographer and filmmaker.

Manon worked as a professional actress playing and devising in various performances of awardwinning directors, for several years. She devised a theatre-performance around the tractor-story and theme which she played at international theatre-festivals, and in cities and villages worldwide.

Her first book – On a tractor to the South Pole – (part 1) was published in the Netherlands by “De Geus” in 2007.  Up to 10.000 copies were sold to date. Currently this book is being published in South Korea, by their 2nd biggest publishing house “Sigongsa”. Part 2 will be published after the (final) South Pole leg of the ‘Tractor Girl’ adventure.

December 2012, the final leg of the ‘Tractor Girl’s’ journey will take her to Antarctica.

The ‘Tractor Girl’ project was funded through crowdfunding (‘avant la lettre’). By people who enjoyed the story and bought a km, a tractor t-shirt, or (currently) book Manon as a motivational speaker.