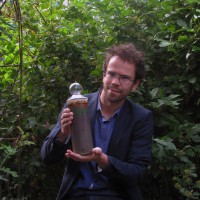 He received his PhD in Environmental Biotechnology in 2007 under Professor Mark Van Loosdrecht at TU Delft, the Dutch cradle of microbiology. Subsequently, he received a grant from Netherlands Organisation for Scientific Research (NWO) and moved to the US, where he joined the lab of Professor Colleen Cavanaugh at Harvard University. Here he spend several years conducting research on various topics including symbioses between gutless marine invertebrates and sulfur oxidizing bacteria.

Since October 2010 he has been working as a scientist in the Microbiology and System Biology department of TNO in Zeist. Roeselers is involved in many projects for industry in which microorganisms play a role. Currently, his research is focused on the microbial ecosystems inside human and animal intestines. In June 2012 he was awarded the title Young Professional of the Year by the young professional network association ICA. According to the jury Roeselers has a “…clear vision to use innovation in solving the ecological challenges of a growing world population with an increasing burden on natural resources…”.

Let us surpise you – What kind of TED talks do you want? TEDxDelft Mars blog: top 5 Mars missions
Scroll to top