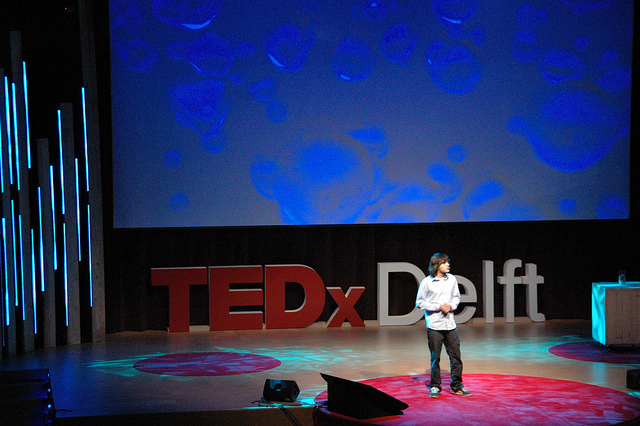 Boyan eloquently confronts you with the marine pollution problem as he takes the stage. He remarks that a common reply when he’s talking about the environment is something along the lines of “that’s for our children to worry about.”

Boyan looks at the audience, smiles and waves: “Hello. Here I am.”

And while most of the world seems concerned with prevention and education (perhaps because cleaning the oceans seems like such a daunting task), he asked himself: “Why not clean it up?”

Boyan was always interested in sea life. While diving and making underwater pictures and videos, he saw the evidence of plastic pollution in the ocean upclose. As he was diving in Greece with a friend, he saw more plastic than fish. A disturbing realization, to say the least.

For a school project he started to investigate how to clean the oceans, the gyres to be specific: five oceanic currents with the highest amount of plastic pollution. This school project evolved into a plan, and that’s what he presents now: The Marine Litter Extraction Project.

The impressive marine plastic cleaning concept, shown beautifully on Boyan’s website, consists of booms that move and that clean the plastic debris out of the water.

The booms Boyan proposes will be used for the ocean’s cleaning would be able to run on natural energy (sun, currents and waves) and the bycatch rate will be almost zero. It does not only tackle some main challenges like the fact that plastic moves on the currents and that such a plan needs to financially realistic, his plan might actually be profitable when the plastic retrieved is sold!

And another stunning aspect of this plan is this: It has been estimated that by current methods it will take us 79000 years to clean the oceans. With Boyan’s plan it will take 5. Just think of what an important impact this might have on our environment.