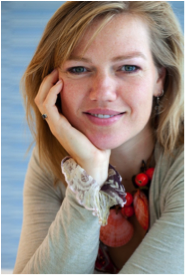 While studying to be a social worker in Driebergen, she went on a trip to Suriname for an internship. “I began to notice how the economic situation alienated the people. Even more so because Western concepts had been imposed on people out of context. It was the first time I realized the impact economy has on human life,” she says. It wasn’t just abroad; Matthijsen found that the economy had little regard for human life everywhere in the world. “I realized that even I was alienated by the economy. That every individual was relegated to second position – whether in a company where he has no share of profits or in a competitive environment where he has to push himself incessantly.”

Despite her instincts, Matthijsen wasn’t ready to sidestep modern economic thinking just yet.

She enrolled at a university in Amsterdam for a course in Economics but dropped out after a year. “What we were taught really upset me and the only thing I did was question everything!” She gave it one more shot and worked with ABN AMRO bank for a while, but, ultimately decided to go with her gut. “I really wanted to understand if I was getting something wrong. But the more I experienced things the more I came to realize that while I understood everything well, I just did not agree.”

In 2009, when she founded Economy Transformers, the economy was in a slump. The world had also realized that there were serious gaps in the mechanism. When Matthijsen approached a few well known professors, everyone appreciated her idea and encouraged her to pursue it. They felt it was necessary but couldn’t do it themselves. “They felt it was too daunting to take on a journey like she had in mind: thoroughly working on new paradigms for the economy. But, my gut feeling was that it was time for change, so I persevered. In the first year that ET began, many people wanted to join and my instincts were proven right,” she says. Economy Transformers identified a ground pattern for change; the six dimensions.

Today ET has a group of 600 thinkers and do-ers from different disciplines and they investigate issues around economy, nature, sustainable development and long-term well-being for all. “I know that things won’t change overnight, but I am happy with what we have achieved.”

Read more about the leaders for economic change programme she and her partner are running.