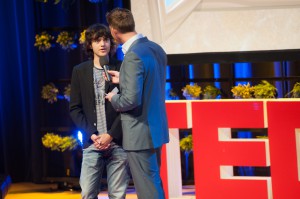 A very special moment for the audience: after a year of virtual media silence, Boyan Slat is back on the TEDxDelft stage to be interviewed by host Sipke Jan Bousema. His talk from last year – “How the oceans can clean themselves” – passed a million views on YouTube an hour before he comes on stage at TEDxDelft 2013. He’s modest about it, when Sipke Jan asks him how that feels: “it’s  ok.”

So how did it all get started? Two and a half years ago, Boyan read about plastic pollution. There is 30 times more plastic in the middle of the ocean than there is naturally occurring plankton and nothing was being done about it. He decided to write his final assignments for secondary school on the subject. He won a prize for his assignment and this was reported in a local paper. He got invited to TEDxDelft 2012, and two months later his talk had been viewed some 3,000 times. So far so good. But then, on 1 April 2013, another newspaper article appeared and the media exploded.

Boyan finds it hard to control the media, and confesses to have great respect for Kim Jong Il and the Chinese government, who seem to be expert at this. Boyan is adamant he wants to get the scientific data right before going public. Though 99 {95388bbb2e9df0f2b3d26445fc24fe82185b1b567dbb094bc3a45074083d0a2b} of the feedback he received was positive, one guy insisted it was not feasible, says Boyan.  Moreover, he said that if you tell people you can clean up the oceans, you give them an excuse to keep polluting. But that is not what the Ocean Clean-up is about. “We have to close the tap of pollution first.”

Yet the public attention also helped. Through crowd funding, he raised 80,000 dollars, enough to start the research. Since July he and his team have been scale modelling and analysing half a ton of actual plastic ocean waste. He expects the feasibility study on  his solution to be ready by February 2014. Can you tell us anything more about the results, insists Sipke Jan. But Boyan is even more insistent: He won’t give us any details, because there is the potential of another hype. “We want to get a scientific article out first.”  Watch this space.