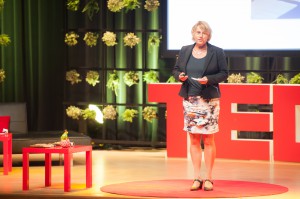 The talk began with a thought provoking video about a mock initiative called Radi-Aid. With a heart-rending background score, the video talks about “spreading warmth to Norway” by encouraging Africans to donate their heaters to the cold people in Norway. “Imagine if this was the only video people in the world saw of Norway. The only think they would know about it is that it’s a cold country,” starts Carin Boersma, forcing the audience to question long held stereotypes about developing nations perpetuated by the media.

Boersma is the Program Officer at Oxfam Novib,  a Dutch developmental organization that works across 94 countries to create a world without poverty. For the past six years she has worked on Emotive, an initiatve that follows the principle of mutual exchange of ideas among nations around  the world.

“We have to stop thinking that we [developed nations] have all the solutions. Instead we  should learn from others and understand and respect the socio-cultural processes of every nation,” says Boersma.

She illustrates her talk with fascinating examples. One is about a lesbian Muslim, who had approached the Dutch COC for help with her situation. Ill equipped to deal with the situation, the COC contacted Emotive, which in turn located an Imam in South Africa who works with homosexuals and trains youngsters to cope with related issues.  “Together, the COC and the Imam helped her and several others. Today, she is a prolific activist and helps others around the world.”

Another example of mutual exchange trumping top down ideas is in journalism. She talks about an African journalist who has created a network of local and international writers to ensure that stories take into account every perspective and hence have stories that are balanced and well informed.

“Mutual trust and mutual respect will always lead to better understanding and a greater knowledge of any subject.”

TEDxDelft 2013 | What else? TEDxDelft 2013 | Ben Bronsema ‘I feel the need to realize my dream...
Scroll to top
We use cookies to ensure that we give you the best experience on our website. If you continue to use this site we will assume that you are happy with it. OkRead more