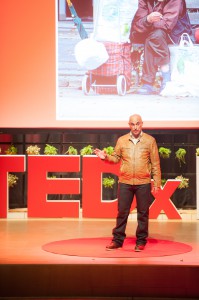 Jamal Mechbal speaks about his homelessness.

Jamel was 29 years old when his son was born and 34 when he and his wife got a daughter. He spent about ten hours a day working and made lots of money. They had moved from the Netherlands to Canada,later to San Fransisco and back to Holland again. It seemed a lifetime success. But after his wife left, everything collapsed. He couldn’t cope with the situation and broke down after three years of stress. He lost his job, built up debts and finally lost everything he had worked and strived for, including his children.

Like a prison
He worked as a cleaner and he worked in factories, but in the end he was let go. He gaped into a big, black hole. Ouside it was terrible cold in the Netherlands at that time. So he went to a shelter to have a roof over his head. But he hated it! It felt like a prison to him . You had to be out at 9 AM, couldn’t come back until 4 PM and after 10 PM there would be no bed. People around him used drugs and alcohol. He felt completely lost.

Then, by coincidence, he learned about JES in Amsterdam. JES stands for Je Eigen Stek (Your Own Place). It was created by the homeless for the homeless. There, he got a key, his own room, there was a computer, internet and a phone. ” I could use my talents again”, says Jamel. “And in no time I had a helicopter view on my problems, could make an exit plan and execute it. That was a great feeling!”

Everything back
Jamel got back on top and won everything back, including his children. His ordeal was over. And it tought him one very important lesson: “I’m really grateful for the opportunity I got. We should give people the chance to do what they can. Let’s not look at what is not possible. but at what people can do. That is the to get back on top. it happened to me and it helped me. Thanks for your attention, now I have got to get back to work!”

TEDxDelft 2013 | 1,100 people attend TEDxDelft 2013 TEDxDelft 2013 | Rutger de Graaf: big problems need big solutions
Scroll to top
We use cookies to ensure that we give you the best experience on our website. If you continue to use this site we will assume that you are happy with it. OkRead more