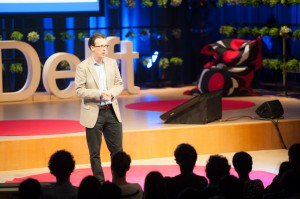 Rutger de Graaf is a man with a mission: to build the first floating city on earth. Why? Because by the year 2100 earth’s population is expected to rise to ten million, and we’re simple running out of space.

Rutger the Graaf dazzles us with some big numbers. We already live in giant cities along the coast, he says, and 150,000 people move to a city every day. That means that by the end of his talk, the number of people in the audience – 1,000 – will have relocated to a city. And by the end of the century a staggering total of 4.5 billion people. Combined with ever-rising consumption, we will need twice as much farmland forty  years from now.   Not only that, but land is lost due to sea level rise. Fossil fuels are depleted, so we need land to grow bio fuels. All in all, we are faced with a future land shortage of 22 million square kilometres, the size of North America.

Such a big problem needs a big solution, says Rutger, and he has one.  Seventy per cent of our planet is water. That can give us the space we need, and the cities are already there. We can build new cities on water, and use waste and CO2 from existing cities to produce food and energy, for example on floating algae farms. This is the Blue Revolution, the next step in human development.

Do you think this is innovative, creative or simply impossible? All the building blocks are there, says Rutger.  He should know, as he spent his years in Delft studying the subject. We can build floating houses, and we know how to protect floating cities with floating wave breakers.

And it is already happening.  In Rotterdam there is  floating pavilion for conferences. It was built in a year, and then moved to its location. It can be moved again, if necessary. Imagine you can move with your house to another city, or put a bigger house on your plot of  water. Buying your own plot of water? Yes, this is also already happening: in Delft you can buy a plot of water, and five families are already building  their own floating homes!

All in all, floating cities are not only needed, they are possible and already happening. So join the blue revolution!