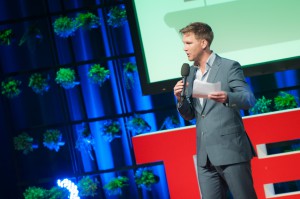 Wow, it’s a wrap! TEDxDelft 2013 has come to an end, and what great moments it brought us! Just to mention some of it. Marije Nie, who makes poetry with her feet, Anne Walraven who believes in sharing dreams instead of nightmares, Ben Bronsema’s inspiration by his late wife that caused him to do some incredible stuff. Talks about building on water and plans on cleaning the oceans. Gerwin Smit making the difference in the field of prostheses and Tim Zaman making 3D paintings. There was books swapping and radiation tests and even playing music with bananas.  Japie being his rebellious self and John Cohn an amazing nutty professor. Yes, it was a pretty great, inspiring and FUNtastic day! If you missed out, you can read the live blog on the website. We have put all photos on Flickr. And in a few weeks all the talks will be on YouTube.

We also received the blog written by Laetitia Martina, Studiolae that gives you a nice impression of the day.