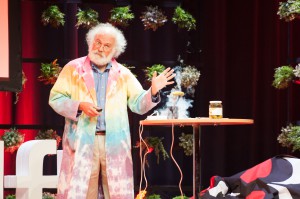 Dr John Cohn is a self-confessed nerd. He already knew he wanted to be an engineer at the age of eight, found himself a nerdy college, a nerdy job and even a nerdy wife, or at least a fellow-engineer.  As a nerd he breaks the mould though.  Because onstage, with his rainbow-coloured lab coat, his Einstein-inspired hairdo and his party light headband, he is most of all entertaining and fun.  That ties in with his motto:  keep things playful. Bring a playful spirit into your work.

John says he is at his most creative, influential,  productive and happy when he is playful at his work. With playful he means being in a state of childlike innocence.  So playfulness is not just about enjoying your work, you are even more creative, as studies show. You can also reclaim that childlike state, by imagining you are still seven years  old.

Life however, has a way of taking play away from us. The harder life gets, the more we have to work at staying playful. If work is not playful anymore, than it is just work. Which is why they call it work, incidentally.  Six years ago, life became very difficult for John, when his son Sam died in a car crash. Sam was an organ donor, and when his life ended he saved the life of four other people. Needless to say, John’s life changed forever. And trying to get his life back on track involved a playful element, although he didn’t think of it like that at the time. John and his family started making SamStones, small stones with Sam’s name on it. Now, over six years later,  some 40,000 SamStones have travelled all over the world, and each stone tells a story. One of them even went to space and back.

Life will give you reasons not to play, and you have to fight back!

Another way John brought play back into his life was by taking part in TV reality show The Colony.  John had a great time trying to survive an imaginary apocalypse in a team with nine others. Most of the time was spent using materials from this supposedly abandoned warehouse  making cool stuff you need after an apocalypse. Such as a flame thrower.  The great thing was the magnifying effect the show had. Because the best way to make people do something at home, is to actually tell them not to do it, says John. So how did his employer feel about John appearing on reality TV? No worries,  John, they said. As long as you kept your clothes on. Oops. To get the full story, watch his talk. In fact, John’s talk is so funny,  you should not read about, but experience it.  So watch it soon on YouTube, or on www.TEDxDelft.nl

No matter what, John loves engineering and science, and also loves to pass on that love: “I like nothing more than kindling that passion in children, lighting that spark in them”.  And lighting a spark he does literally, on stage, by holding a battery against a ball of steel wool. It’s just one of his little tricks to show that science can be fun. Put that same piece of steel wool in your microwave and you’ll see real fireworks. How cool is that? Do NOT try this at home,  however, if you value your microwave…