How do you go from giving a simple presentation to delivering an unforgettable performance? That’s the business of the TEDxDelft Performer Coaching Team: helping speakers to give the performance of their lifetime. 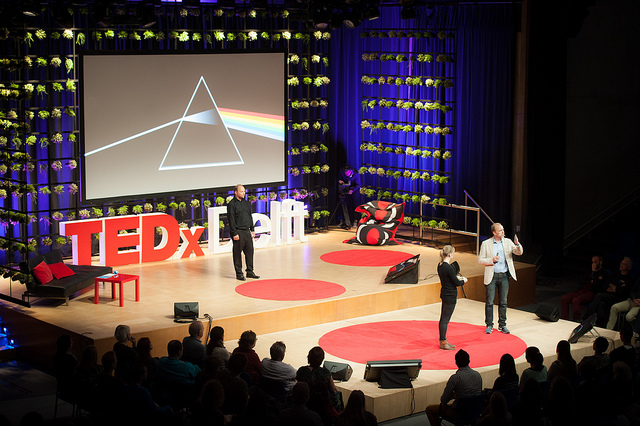 So just how does the team do this? We spoke with Toine Andernach, Co-ordinator of the TEDxDelft Performer Coach Team.

“First of all, TEDx is different from the usual setting,” says Andernach. “It’s not a PowerPoint presentation for your colleagues at work. It’s a performance so people need training in the characteristics of a show.”

At the core of a TEDx talk is the ‘Idea Worth Spreading’ and it usually takes a while before the speakers have boiled all their information down to one simple message. “The speakers might have a vague idea”, claims Andernach, “but we usually need to help them build a story around the idea.” Performer Coach Jonathan Talbott agrees: “If the main idea isn’t very clear then it’s just a cool story. But we’re not in the business of cool stories – we’re in the business of making people think!”

Another challenge for the team is that a TEDx talk is very concise; it can be six, twelve or eighteen minutes long. “That can be tough,” agrees Talbott. “Usually my clients have one of two problems. Either they have way too much stuff or they worry that they’ve got no idea what they’re going to talk about. Usually it turns out they do know what they want to talk about – it’s just a confidence problem. So mostly that’s what I do – I help people with their confidence.”

Once the content is sorted, the coaches turn next to the form of the talk. “Once we’ve got it down it into a ‘Tweet form’ – I mean really solidly sorted out – then it’s my job to say: Hey how are we going to get that message across?” says Talbott. What often works well is a personal story says Andernach. “Where the audience identifies with the story and thinks “Oh yes I can do that too!” – that’s important.”

And there’s another advantage to telling personal stories – a physiological one. “Something happens in your brain when you tell a personal story,” explains Talbott. “As you’re telling it, you really get into it and so you forget your nerves.”

The team also coaches speakers in the use of silence. “If you leave just three seconds of silence between words, sentences, or chunks of sentences, you get a lot for free”, explains Andernach. “Silence can emphasis the point being made and give the audience time to understand.” It’s not easy to do but the Performer Coaching Team trains speakers how and when to use silence. And it can be really effective, says Andernach: “If people are able to do it well in their talk, it always gives me goosebumps!”

TEDxDelft 2015 | Made Possible By | Fabrique | Pushing the boundaries of cr...