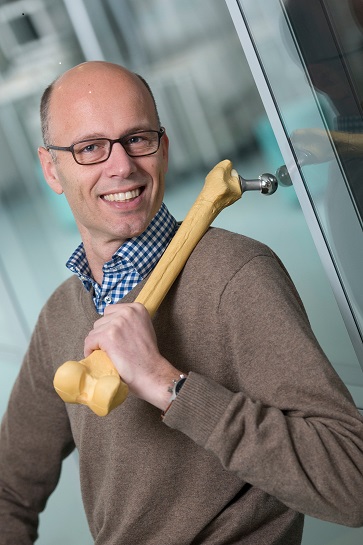 “If you want something done, ask a busy person.” This pearl of wisdom describes Edward Valstar to a T. Valstar is a professor at the Department of Orthopaedics of the Leiden University Medical Center. He is also an Antonie van Leeuwenhoek professor at the Department of Biomechanical Engineering at TU Delft and this double appointment makes him one of a select company of Medical Delta professors. On top of that, Valstar is an adjunct professor at Dalhousie University in Halifax, Canada. Yet, he still manages to find time to step on the TEDxDelft podium this month and with great enthusiasm too. “TEDxDelft is a great format to reach a wide audience,” he says. “After all, as academics we tend to talk a lot to each other at conferences and such.”

Indeed, Valstar is a fan of TED. “I’ve always been fascinated by presentations and how people voice their ideas. And at TED conferences you get some real presentation ninjas.” His favourite TED talk is by someone he describes as “high-octane”: bad science debunker Ben Goldacre. “Here’s this bundle of energy on the podium expounding his thoughts on how researchers set up studies and how others interpret the results. It’s fascinating.”

With an MSc in mechanical engineering and a PhD in the imaging of orthopaedic implants, Valstar’s expertise lies in marrying engineering and medicine. “Orthopaedic surgery is the surgical application of carpentry, as it were. That is why I get along so well with orthopaedic surgeons. I’m not sure pharmaceuticals would have been my thing.” Back in the day, his graduation project involved the validation of a muscle and skeletal model of the shoulder. As the years passed, his interest moved to include the hip and the knee and other places where artificial joints can be implanted.

By 2020, the worldwide number of hip replacements is expected to rise to 2.5 million per year. Roughly ten percent of these implants will fail within ten years, based on current performance. Valstar’s ultimate research aim is to make hip replacements last for a lifetime, eliminating the need for revision surgery and its accompanying painful rehabilitation process. “For a long time, I thought that we would achieve that by developing new and better replacement joints,” he says. But current thinking has taken another direction, with Valstar at the forefront.

So what is the future of joint replacement? Find out at the upcoming TEDxDelft event on February 27, 2015.

The People Behind TEDxDelft | TEDxDelft Webcare Team | Keeping Everyone Inf... TEDxDelft 2015 Entertainment | Delft Brass | All about the brass
Scroll to top