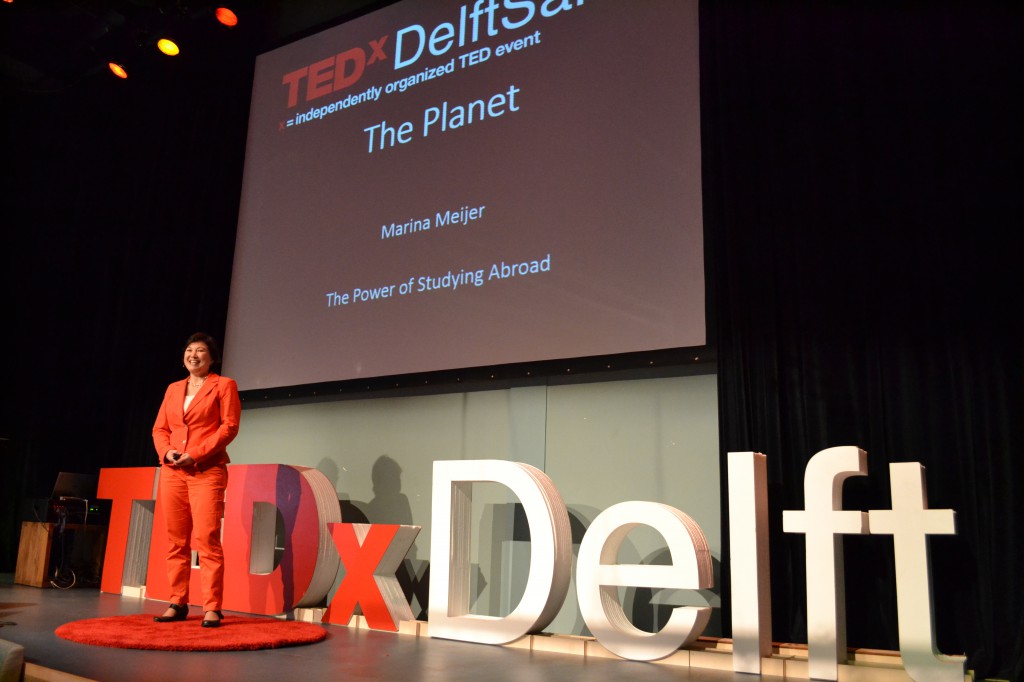 In celebration of International Women’s Day TEDxDelft organized its second salon of 2015 at Theatre de Veste on March 8. The main theme for this salon was “The Planet” -more specifically how various elements on Earth are connected. For this event, three special guests, each at the top of their respective field, were invited to share their views. The topics touched upon hacking nature, education, and energy and ethics.

The first speaker was Stephanie Whener, a former computer hacker who was employed by a company to test the security of their IT systems. “When you are thinking about hacking, you think about hacking computer networks,” Whener explained. But there are other networks that interact and share information, made up of particles, atoms, and electrons. “I believe information is the key to understand nature,” Whener says. These particles do not follow the same laws that apply to bigger objects, but those of quantum mechanics that cannot be experienced in our daily lives. The main obstacle so far has been Heisenberg’s uncertainty principle, which states that there is a limit to the amount of information that can be stored. With the tools available nowadays, she is convinced our understanding of these networks of particles will get better, and as a result, our understanding of nature.

Next was Marina Meijer, who believes that studying abroad is a vital experience that every student should embark on. “I would not have become the person I am now without having experienced this,” Meijer explains. Traveling to countries such as the United States, South Korea, and Tunisia made her appreciate and understand differences between cultures and languages. “Living abroad also means loving abroad,” she says. Her time abroad also made her think about the Dutch culture and society she grew up in. She believes studying abroad should not simply be about attending prestigious universities, but about the experiences it can offer and to look at it as an adventure. “Studying abroad is not about studying, it is about being abroad.”

After a musical interlude by singer-songwriter Linda Kreuzen, Rafaela Hillerbrand took to the stage and discussed what has been perceived as a conflict between energy and ethics. The current debate focuses on the question of well-being versus sustainability, but Hillerbrand believes this is not the main dilemma. “What is well-being?” she asks. “Is it preserving a landscape, or using energy to power a hospital?” This sense of freedom of choice also applies to different forms of energy. “It is not as simple as saying wind energy is good and nuclear energy is bad,” she argues. Dams, when damaged, can destroy the surrounding landscape. Someone who buys an SUV may do so because his or her children have disabilities, and only an SUV can provide an adequate means of transport. People have their reasons for the choices they make regarding energy consumption. It is often because these choices are not fully understood, however that creates the debate between what is perceived as good or bad energy. It is by simplifying our definitions of well-being and sustainability, Hillerbrand says, that it will be possible to bridge the gap between ethics and energy.

Whether it is the interaction among particles or people, or how well-being and sustainability are two sides of the same coin, today’s talks have illustrated that things on this planet are more connected than previously thought. Only by exploring these links, and redefining what we know, has this allowed for more appreciation of what binds everything together.

If you are interested in taking part in this unique conversation, join us for the next TEDxDelft salon on April 12, 2015 where the topic will be “The Future.”

We also invite you to join us on May 29 for the TEDxDelft Women’s event, which will be held at the Rietveld. Keep an eye on the TEDxDelft website for more information on these upcoming events.