News
You are here: Home1 / News2 / TEDxDelft3 / The people behind TEDxDelft | Ailie Conor | Keeping it cool 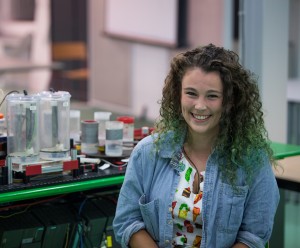 “I have always enjoyed TED talks, and TEDxDelft is one of the more accessible TEDx events around, which piqued my interest – and it seemed like a great way to hear some cool ideas, and meet even cooler people!” Conor explained, when asked why she initially joined the team. And it’s a great thing that she did, because of her extensive background in journalism and creative writing, Conor made an excellent addition to the team. She moved up quickly from assisting as a social media volunteer at the main event, to taking over all of the TEDxDelft social media, which entails planning the content throughout the year, and live-posting during the events.

A lot of patience and coordination is required to fulfil this role. If you go to any TEDxDelft event, you will be sure to see Conor glued to her computer keeping the TEDxDelft audience tuned in to everything they need to know about the event that day. It is a lot of work and certainly a challenge, but count on Conor to keep her cool and deliver every single time.

Not that long, only around 8 months.

You worked as a volunteer for the social media during TEDxDelft 2015 and TEDxDelft Women. Who is your favorite speaker from a previous TEDxDelft conference and why?

From TEDxDelft Women, I really enjoyed the talk by Dr. Sheetal Shah, about ‘Education in the Real World’. It’s so important to contextualise learning, and to teach students that there is no singular human experience.

I was reading the other day about Ching Shih, a woman in Qing China who was also a formidable pirate – she was a badass and I am pretty sure she would have some ideas worth spreading.

I love gaming, board games and video games. Me and a group of friends play D&D on the regs.

If I had to give one, it would probably be ‘It’s okay to be angry’. Being angry about certain things doesn’t make you irrational, or delegitimise what you have to say – although I think this is a message we give out as a society.