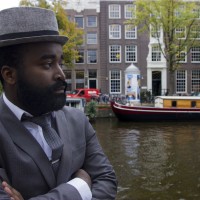 “Refugees left their home, and we can help them build a new one,” says Kiza Magendane. A writer and student, he says the welcome they receive is a very positive one, but he argues we should try and improve it even further.

Magendane originally hails from the Congo, and eventually he moved to the Netherlands. After finishing high school he enrolled at the University of Amsterdam, where he studied political sciences. Starting in 2011 he also became very much involved in various groups and associations with a focus on such topics as the African youth diaspora in Europe, improving social cohesion in urban areas, and bringing together people from various backgrounds. In addition, he has written for various publications on Africa and politics and migration. “I am an opinion maker,” he said. His involvement with the various organizations has given him a very clear perspective on the integration of migrants in Dutch society and ideas on how he feels it could further improve.

The majority of the Dutch are very welcoming to refugees, Magendane explains. “Every day thousands invest their time in giving refugees a warm welcome and guiding them into Dutch society.” If this image is distorted in any way, it is because of the vocal minority found on various social media outlets. For Magendane, it is clear that the focus should be placed on those who, if silently, do their part and make a difference for so many people who have left their homes behind in search of a new one.

It is from these people that Magendane draws much of his own inspiration. “I see lots of people who take the initiative,” he said. “This is what inspires me.” Inspiration to think about new challenges that arise and need a solution. How to encourage people to make new connections, and instill in people the realization that they can help and make a difference for someone else. Ensuring that people understand one another better and feel more included as opposed to isolated in a center for asylum seekers. “Having a home is important for everyone,” he said. It is Magendane’s goal to inspire more and more people to continue welcoming refugees, and to help them build their new home.

Curious to hear how Kiza Magendane believes we can further help feel refugees welcome? Then buy your tickets now, join us on Friday 15 April and come celebrate the universal genius.