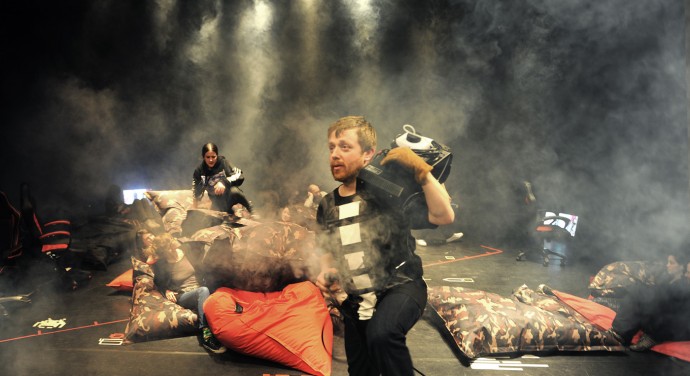 The Great Warmachine made such a strong impression on its first run, that theaters throughout the Netherlands invited this English-spoken production back. A great opportunity to get an idea of the strong qualities of modern dutch theatre.

About The Great Warmachine
November of 2011, General Van Uhm, commander in chief of the Dutch armed forces, gave a lecture at the Amsterdam City Theatre, in which he argued that weapons help us to maintain peace. This soldier in a theatre inspired Joachim Robbrecht to write a dizzying piece that challenges the audience to look at the phenomenon of war from different points of view. The performers embody the likes of game designers, engineers, inventors, dreamers and trendwatchers. The Great Warmachine was selected for the Flemish Theatre Festival.

“Seldomly, a performance has discussed the worst and most serious news of the world in such a fresh and tongue-in-cheek manner. Its drive is astounding, and it draws the audience into the play more and more, physically.” (Flemish Theatre Festival Jury).

We’re back – with a TEDxDelftSalon on TEDxDelft itself :-)
Scroll to top