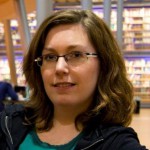 Can you tell us something about yourself?
I am Simone de Jong (@Sim1andOnly), 35 years old, living in The Hague with my husband and two kids. After I graduated in Arts & Sciences at the University of Maastricht, I became a science communications consultant at that university. A couple of years later, I moved to The Hague to work at communications consultancy Schuttelaar & Partners, where I specialised in public participation of policy making. Six years later I decided to return to my ‘first love’: science communications, in which I found a great job at TU Delft. I love to make our research widely known and find ways to show the world what great work is done here in Delft.

What’s your job at TEDxDelft?
Together with Rob Speekenbrink, I co-founded TEDx Delft. My job is to coordinate everything that is going on, keeping track of the big picture while at the same time working on whatever needs to be done, from talking to potential speakers, sponsors to volunteers. I also try to engage high level people in endorsing TEDx Delft. Why? Because I believe that TEDx and Delft are made for each other!

What’s your favorite TED(x)talk?
From my background as a science communications consultant I love the talk of Catherine Mohr: Surgery’s past, present and robotic future (speaking of ‘creating history’!). She tells – and shows – the radical ways in which surgery has changed over the years. I often use it as an example to our researchers of how to communicate science.
From a personal point of view I love the talk of Rufus Griscom and Alisa Volkman, who have the courage to address some taboos on parenting. Furthermore, I love to see the way in which they perform together, as a team, on stage.

I was very touched by the TED talk of Stacey Kramer, who shares her story about cancer; how an unwanted experience – frightening, traumatic, costly — can turn out to be a priceless gift.

What’s your idea worth spreading?
I believe citizens, consumers, people in the street become more and more producers, policy makers and journalistst themselves. In what way does this effect the way in which ‘traditional’ authorities, like the government, media and science, operate? It’s more a question than a idea worth spreading, I suppose..

Which keywords define you as a person?
Enthousiastic, structured, emotional, decisive.

TEDxDelft team – Ginny Ruiter TEDxDelft team – Jeroen van Erp
Scroll to top
We use cookies to ensure that we give you the best experience on our website. If you continue to use this site we will assume that you are happy with it. OkRead more