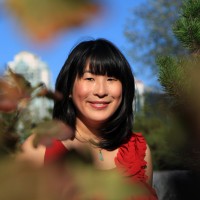 In 2007, while studying Chinese at Tsinghua University in Beijing, Suzanne Ma caught the trail of a story that would fascinate her for years – the lives of Chinese immigrants as newcomers in Europe. The Chinese-Canadian author and journalist, one of the speakers at TEDxDelft 2015, follows this trail in her new book Meet Me in Venice.

The book follows the journey of a young girl named Ye Pei from China to Italy and the challenges she faces as an immigrant. “The idea for Meet Me in Venice actually came to me back in 2007 when I met my husband, a Dutch-born Chinese guy by the name of Marc Kuo.”

Born and raised in Holland, Kuo’s ancestral hometown is in eastern China. “For me, as a Chinese-Canadian, I was fascinated to learn about the migration route from China to Europe. It’s a story I hadn’t heard before, and I wanted to know more.”

At the end of their year abroad in China, Kuo returned to Holland and Ma went on to do a master’s degree in journalism at Columbia University. There she won the Pulitzer Traveling Fellowship which enabled her to start her research on this topic and travel to eastern China. “Marc’s ancestral hometown has a 300-year history of migration to the West. Most of the migrants from this region of China end up moving to Europe. I wanted to know why and I wanted to witness this migration, which continues today, with my own eyes. The goal was to meet migrants who were getting ready to leave China. Then, I planned to follow them to Europe and see how their lives unfolded. I stayed in China for a year before setting off on my European tour, visiting Chinese communities in Holland, France, Belgium, Italy, Spain and Portugal.” Ma also started a Kickstarter campaign to help fund her first trip, though it took two more trips to Europe before she could finish the book. Over the years she visited Chinese communities across Western Europe.

She believes that policies and public opinion in the Netherlands are among the most progressive here. “I think the Chinese community, especially that of my husband’s generation, is well integrated and generally the Dutch are quite accepting of the Chinese communities in their midst. That said, I do see some signs of stagnation in terms of the way minorities view themselves in Holland and also the way in which they are treated by the general Dutch population.”

Having grown up in a multi-cultural neighborhood in Toronto, Ma confesses that while she has never been the victim of major bigotry or racism, not every Canadian is lucky enough to be able to say so. “Discrimination happens everywhere, but Canada is indeed a land of immigrants and that’s helped create a society that’s extremely inclusive.”

One of the biggest differences she has noticed between Europe and Canada is how vocal and visible the immigrant communities are in Canada. “We have so-called minorities in government – members of parliament, premiers, mayors. Minorities aren’t afraid to ‘rock the boat.’ If we’ve got something to say, we say it. Media newsrooms reflect Canada’s multiculturalism. The people on TV reading the news are not homogenous. I don’t see this kind of diversity in Europe, not even in Holland.”

Currently working on her talk for TEDxDelft, she says “At the most basic level, when it comes to dealing with the influx of so many newcomers, it’s really important to have empathy. That is the theme for my talk.”

Like most followers of TED, she has too many favorites to name. However, she did suggest two that resonate with the topic she will be exploring. “Here are two TED talks that have really touched me as a writer and someone interested in immigrant stories.”

Lisa Bu: How Books Can Open Your Mind