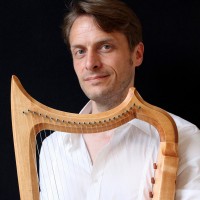 “All of my life I have been a generalist rather than a specialist,” said Daan Verlaan, music artist, “But it took me up until my time at university to realize that.” One of the missions he has embarked on is “to prove that medieval music is just as interesting as any music”. Nonetheless, he hadn’t got in touch with it before he started working in Belgium. “At Dutch conservatories, there is generally little interest in music from before 1500,” he said.

After high school, Verlaan started his Greek and Latin studies at Leiden University. Even during his graduation on Greek tragedy, his generalistic nature resulted in linking different levels within it to each other rather than focusing on one specific aspect. “During my master’s studies I got more and more into music, especially composing,” he said. “That’s why I started with an additional bachelor’s degree in contemporary classical composition at Codarts in Rotterdam.” Following his second graduation Verlaan decided to make a career out of making music. As a choir singer, soloist and harp player, he performed different genres in both the Netherlands and Belgium. Four years ago, he became a guest teacher at the Brussels Harp Centre.

In addition to being a performer, Verlaan was also a tour guide at the Boerhaave Museum for the history of science and medicine for more than a decade. “Da Vinci combined both science and art, always looking for the essence and the beauty of things,” he said When being asked why he thinks he got invited to the TEDx stage, he hesitates: “Mainly because of my way of thinking at the meta level, being a musician as well as an academic.”

With two diplomas to his name Verlaan could have pursued a PhD, but decided to compose music, for which he was awarded on multiple occasions. “But after [composing for] some time, I wondered: ‘What do I really have to say?’,” he said, after which he focussed on playing rather than writing new music. It seems to him that people consider art as a consumer good rather than a way of expressing something universal with the artists acting as a conduit. “But artists are not only ‘beautifiers’, music is not solely aimed at alleviating.” One of the reasons why he also talks in-between songs during his performances is to emphasize this. “That even holds true for pop music!”

Do you want to know why? Then buy your tickets now, join us on Friday 15 April and come celebrate the universal genius.