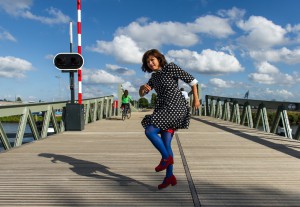 Marije Nie is a musician with her feet, a dancing percussionist. Her tap dance style is the perfect symbiosis between music and dance. The rhythm dictates the movement and the movement determines the sound. She feels at home in many different kinds of music: jazz, improvisated music, worldmusic, (contemporary) classic music, experimental electronica and dance. In 2007 she won the Jur Naessens Musiekprijs for innovation in music. With her skills for improvisation and her passion for experiments, she created her unique niche between composed and improvised music.

At TEDxDelft she will present her tap dance adventure, the film One Million Steps.
This film is about where the millions of steps we take in our lives take us. – Do we just automatically follow our path or are we open for new challenges and creative choices?

This documentary film is fiction, a musical and dance film all in one. What started as an experimental short dance film about a lost tap dancer in the streets of Istanbul was radically changed by the actual explosive protests in and around Gezi Park.

Marije Nie and Eva Stotz started filming in April 2013, when all was still quiet. At the end of May, the city changed it’s beat and the spirit of the protests crashed right into the film, showing the hot fury that was bubbling under the surface all this time.

This film shows the power of one step: it is the smallest unity of human locomotion, but has the potential to change the world.

New forms of concert and relationships with audiences 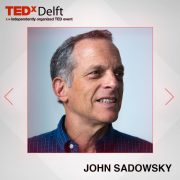