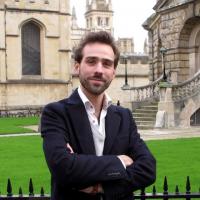 For the past five years Max van Duijn, Assistant Professor at Leiden University, has been studying storytelling. “I see it as a puzzle,” he explained. “Why do people all over the world spend so much time in the worlds created by stories?”

Van Duijn studied at Leiden University, where he obtained a Bachelor’s degree in Dutch Language and Literature, in addition to following a minor in Business Administration. He followed this up with a Master’s in Literature/Linguistics. Having attained his MA, he embarked on a multitude of projects. He became a PhD fellow at Leiden University, and worked at the University of Oxford as a Visiting Researcher where he was affiliated with the Social and Evolutionary Neuroscience Research Group, headed by Professor Robin Dunbar (known for formulating Dunbar’s number, which says that people have a cognitive limit to the number of stable relations a person can maintain). Since 2015 Van Duijn has been working as an Assistant Professor at Leiden University.

“There are several reasons why people tell or listen to stories,” Van Duijn said. “To escape from reality, to learn, but also to maintain social networks.” People are drawn to the worlds created in stories even though they might not be relevant to the listener. “It fascinates me.” And so van Duijn started his research into storytelling, bringing in psychologists to investigate what happens to people when stories are being told. “When stories are being told the brain switches to a different mode for both the storyteller and the audience,” he said.

Van Duijn is convinced that his research into stories and storytelling will help lead to a better understanding of humanity. “It will help us to better understand who we are, and why we are the way we are,” he said excitedly. “Man is a type of primate, forming a social structure which leads to a network.” From a biological standpoint the chimpanzee resembles man, but their social networks are limited. For people, the networks are far more complex and expansive. What is most interesting to Van Duijn is finding out how stories help build and maintain these social networks. “I believe this research can offer us some fundamental knowledge about the functioning of people in society.”

Are you interested in learning exactly how Van Duijn thinks stories help create and maintain the complex social networks we all have? Then buy your tickets now, come join us Friday 15 April and celebrate the universal genius.