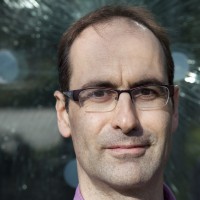 When he was eight years old, Bennie Mols (1969) wanted to become a professor. He failed. Instead, he became a science journalist, science writer and science communicator. He holds master degrees in physics (TUE) and philosophy (UvA), as well as a Ph.D.-degree in physics (TUD, 1999). He never stops wondering about science in general and physics, computer science, mathematics, neuroscience and psychology in particular. And he tries to make a living by sharing the fruits of his wondering with a broad audience.

Bennie Mols wrote more than four hundred popular science-articles for, among others, NRC Handelsblad, NWT Magazine, KIJK, Intermediair and De Ingenieur. He published several books and has participated as a speaker in more than two hundred radio broadcasts explaining science to a broad audience. Earlier this year he published his latest popular-science book: ‘Turings Tango − Waarom de mens de computer de baas blijft’, about the quest to build thinking machines. The book combines the latests insights in artificial intelligence with those from the brain- and cognition sciences and philosophy. Turings Tango also honors the birth of computer pioneer Alan Turing exactly one hundred years ago.