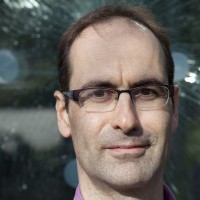 Hoovering is complex
“Look at Japan”, Mols says. “It is the leading country in the world in creating and using artificial intelligence. But after the disaster in Fukuyama it were humans that had clean up the mess. There was no robot that could do the work. Because a robot is not a human and doesn’t need to be. A small example: there are robots to hoover houses. But hoovering requires complex decisions. What to do with that one small paper on the floor? Hoover it or save it? Robots don’t know, humans do.”

Mols statest that computers and robots don’t have our limits, but on the other hand they have no urge to reproduce themselves, like us. The human brain, that has hardly evolved over the last 100.000 years, is conditioned to let the human body survive and to keep the species alive. That is the big difference with artificial intelligence; computers are efficiënt, they don’t get tired and they don’t make mistakes likes humans do. Also they have much more capacity and they work infinitely faster. But they are not creative.

No good use
We don’t seem to put that creativity to very good use, as we learn robots to lead ceremonies, play a trumpet and defeat the best chest players in the world. We ought to learn them other, more practical and usefull things. Luckely we are starting to realise this. For example, plains can fly on an automatic pilot…, but only in cooperation with a human pilot that controls the process. Artificial intelligence can also save about one million lifes per year. It can for instance help avoid traffic accidents in smartcars that can see in the dark, prevent the driver from driving too close to the next car or take over when the driver gets tired.

Supercomputer Watson can help doctors making better diagnoses. Because Watson sees what the human, less efficient doctor oversees. But at the end of the day it is the human doctor that has to draw the right conclusions. “So you see,’says Mols, “computers and robots won’t take over human functions, they only enhance it. In fact, mankind has enhanced its own intelligence by creating robots and computers. Look at the cooperation between human and artificial intelligence as two perfect tango dancers.”