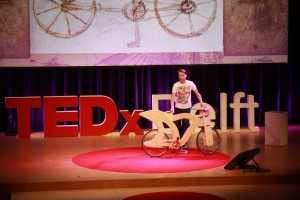 “You are in class and really bored looking around, and you are not the only one,” said Victor Hupe. As a high school student, he also started drawing figures, which can all lead to new ideas. He advocated for learning-by-making to combine education and creativity.

Hupe, the youngest genius of the event, has been drawn to science since he entered high school. Unfortunately, after the third year he could no longer attend science class, but when the opportunity came up, he made an extracurricular activity out of it. Joining the fabrication class, or FAB class, he created a wooden bike and a confidence-increasing cup for children, and much more is to come. In the near future, he wants to join the Faculty of Industrial Design at TU Delft.

Leonardo Da Vinci’s inventiveness was instigated by the freedom to create. Nonetheless, learning new things by making has progressively been pushed to the background. Hupe supports Google’s 20{95388bbb2e9df0f2b3d26445fc24fe82185b1b567dbb094bc3a45074083d0a2b} rule: employees can work one day a week on their own ideas and creations. Nowadays, FAB classes allow students to develop their ideas step-by-step. Thinking, drawing, processing new thoughts, rethinking old ones. Hupe learnt that “you don’t always succeed immediately, which forces you to re-evaluate.” After a year of redeveloping and optimizing, his bike was finally ready.

For Hupe, being critical towards his own work and optimizing it has become a mind-set. He became even more focused in class, and reflected on his creations outside class hours. He encouraged everyone: “Create, and most importantly: never give up. Let us make the world a better place.”