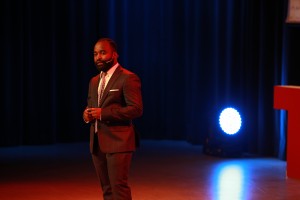 Kiza Magendane, writer and student, showed a picture of himself sitting next to a canal with an overwhelming smile. He asked the public an intriguing question: “Who would adopt this refugee? It is all for free. And I guarantee, you will not regret it.”

Born in Congo, Magendane entered the Netherlands as a refugee himself eight years ago, fleeing from the civil war. After finishing high school, he attended the University of Amsterdam, majoring in political sciences. He got involved in several associations focusing on bridging the gap between people with different backgrounds. Being a writer, he shared his opinion on Africa, politics and migration. Based on his own experiences, he founded African Students United.

Because everything is new, most arriving refugees do not feel at home at all. The recurring questions about how they got here, and why they left their country, are rather hard and personal. Moreover, refugees are often associated with negative images. Magendane felt he had to prove himself to be accepted as a human being: “Reducing a human to a number, takes their dignity away.” However, some people looked beyond the refugee label and supported him in developing a normal life.

Magendane believes he is not unique, and with the support of citizens, more success stories can be created. Magendane mentioned several people he met after arriving in the Netherlands who welcomed him, and encouraged and inspired him to achieve the best that he could. He encouraged everyone to do the same: “Home is relative, love is universal.” The government does not provide love, but citizens do: “Fellow human, adopt a refugee.”