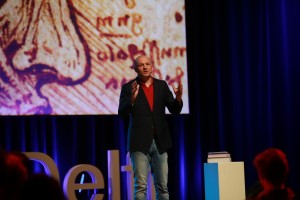 “Everyone is a non-believer, one way or  another. Everybody on the stage today is challenging an already existing idea. Being inconsistent is the third biggest religion in the world,” claimed Boris van der Ham.

Born in Amsterdam, Van der Ham found an interest in drama and arts and was a part of various theater groups performing in Maastricht. Later switching to politics, which became his forte, he has served as the President of D66, a Dutch liberal democrat party, a member of the House of Representatives and the chairman of the Dutch Humanist Alliance. He is currently a writer and holds an important role at the Dutch Humanist Association. Van der Ham has been working extensively on the ideologies of freedom thinkers.

Van der Ham feels that because of their unique or so-called contrasting ideas to the rest of the society, non-believers are challenged in every walk of life. He is critical of the offense and aggression shown towards non-believers in most countries. He feels that peaceful coexistence also involves respecting those different beliefs. “It is human nature to question things. Every idea should be challenged,” he said. As a humanist, he feels everyone’s choice and thinking should be respected and given an equal place.

“The right to be a non-believer reflects our freedom. It makes our lives better,” he said. He therefore challenges them to be confident with their inconsistency and that it is a right to cherish.