Despite the beautiful weather, a number of dedicated people spent their entire day inside a window-less workshop, working hard to build tram cars for the upcoming race next week, during the TEDxDelft event. Four teams will participate, competing on making the fastest tram car.

Rolf Hut who came up with the idea was, besides building his own tram car, helping the teams and was making sure safety was considered. Rob Speekenbrink, founder of TEDxDelft, was also paying a visit to the construction site: “Since the tram tracks are not going to be used for traffic for quite a while, why not put them to good use?”

The trams cars must be driven with a gear which is already in place on the base. Other than that, the options are more or less limit-less, and the strategies of the teams do indeed vary. One team has chosen a straight forward hand-driven solution using a big wooden wheel, while another went all in and bought a second hand motorcycle. The coordinator, Alwin Snel, is himself part of a team, hoping that using a bicycle will do the trick. Last but not least, Rolf is planning to use massive truck batteries and a start-motor from a car. Which one would you bet on? 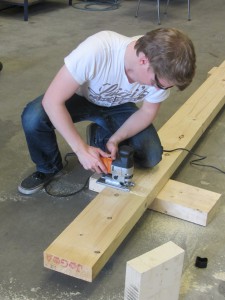 In order to accomplish the task, BetaFactory, an initiative from De Haagse Hogeschool and Kennisalliantie Zuid Holland, has been kind enough to offer space and tools. Gamma in Delft helped out by donating parts, and HTM made everything possible by providing the bases.

If you are curious, make sure to come to the University campus, Friday Oct. 4, in front of the Aula. There will be two races at the day of the TEDxDelft event, the semi-final starting at 10:00 am and the final during the lunch break. See you there!